What goes into a blog post? Helpful, industry-specific content that: 1) gives readers a useful takeaway, and 2) shows you’re an industry expert.

Use your company’s blog posts to opine on current industry topics, humanize your company, and show how your products and services can help people. 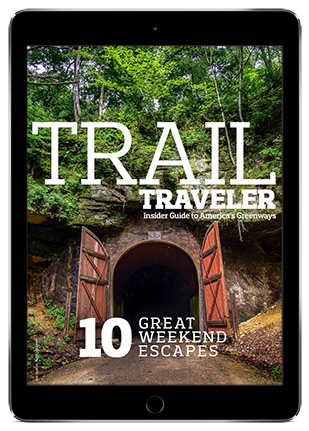 RTC recently launched Trail Traveler, a new digital magazine for tablet computers that is chock full of details for planning trips on 10 premier rail-trails across the country.

In this inaugural issue, RTC shares our favorite spots for an outdoor weekend getaway, including not just the trails themselves, but also recommendations for all the things a traveler needs at every part of their journey: lodging, restaurants, bike rentals and fun attractions along the way. Links throughout each article help you nail down all the details within moments, and the magazine’s maps help you find the locations once you arrive.

Trail Traveler ($3.99) is available via the App Store and Google Play.

The Silver Comet Trail is a multi-use path for bicycling, running, walking, and skating near Atlanta, Georgia.  The Silver Comet Trail is a 61.5 mile, 12 feet wide, car-free concrete path that connects the Smyrna, Georgia (NW of Atlanta) to the Chief Ladiga trail at the Georgia-Alabama state line.  There are multiple access points to the trail, including many with parking, restrooms and picnic areas – refer to the map for details.

The trail traces the route of the “Silver Comet” passenger train line that operated from 1947 to 1969.  Passenger service discontinued in 1969 and the line was used for freight until abandoned by CSX in 1989. The Georgia DOT purchased the land in 1992, construction on the trail began in 1998 and the rail-to-trail conversion was completed in 2008.